Equipment used in critical applications must contain a power supply that is fault tolerant in order to guarantee continuous and uninterrupted functionality. The more critical the application, the more important is uninterrupted functionality. This paper focuses on the importance of system power with immunity to single or multiple failures and it describes the various architectures of uninterrupted power equipment with backup and redundancy. It offers system designers and reliability professionals a range of possibilities to serve this objective on a practical level, and with a minimum cost impact. Knowing the options to formulate a fault tolerant power systems (FTPS), will enable cost savings while at the same time reduce complexity and enhance reliability. Most importantly is to realize the fact that solid state FTPS have limitations which must be considered carefully in order to avoid severe compatibility problems when used with the system.

It is widely accepted that the highest stresses in any electronic system is mostly in its power supply. This is where most of the power losses exist, and therefore the highest thermal stress. The input derived from the utility (or a generator) is subject to fluctuations, brownouts, transients and interruptions. The power components in the power supply are switched at high speed while conducting high current or subjected to high voltages. Further the switching speeds are ever increasing in order to reduce volume and weight. This switching results in conducted and radiated noise which increases exponentially with power level and as a result often contaminate logic and control circuitry in terms of stability and operation.

All of these factor make the power supply of any electronic system the most vulnerable to failure, resulting in total system dysfunction. This is therefore the main reason for designing the system with backup features which permit uninterrupted power delivery despite one or more failures in the utility or power processing path.

In the ultimate case an FTPS is a power supply (with DC or AC input or output) which delivers uninterrupted output(s) to equipment (or functional circuits) despite one or more of the following detrimental events:

Critical systems which cannot tolerate power supply failure exist in every filed. In some, the failure will entail a crash of the system with possible loss of data, but in others it may cause a dangerous disruption resulting in loss of life, crash of a vehicle, loss of valuable specimen, or loss of defense or attack capability in a military situation. The following are examples of such applications:

In the medical filed

In the IT filed

In the Military filed

In all of these failure circumstances the functionality of the power system is impaired and as a result the host system is disrupted. Installing backup entails added expense, and hence needs to be carefully considered in a context of cost benefit analysis. In the ideal situation no backup is needed since the loss just causes inconvenience. On the other hand no price is to high when loss of life is considered, or when large monetary losses will happen such as if trading is halted suddenly in a busy stock exchange. We shall now consider backup measures from the simplest to the most complex to implement. Higher complexity usually means higher cost.

Even in advanced well developed countries (in terms of infrastructure and technology) the utility grid is prone to fail from time to time. This happens due to equipment failure or from severe weather impact or natural disasters. The disruption can be short (one cycle or less) or long (minutes, hours or days). These type of disruptions require a power system that has a well thought out plan how to endure the power outages. Here are the important factors at play:

A key element in every UPS design, and this includes the cheapest standby UPS intended for personal computers are the following important features:

Fig (1) shows a stand-alone UPS box located between the AC utility and a system which requires uninterrupted input power usually for a limited time between a few seconds and 24 hours. 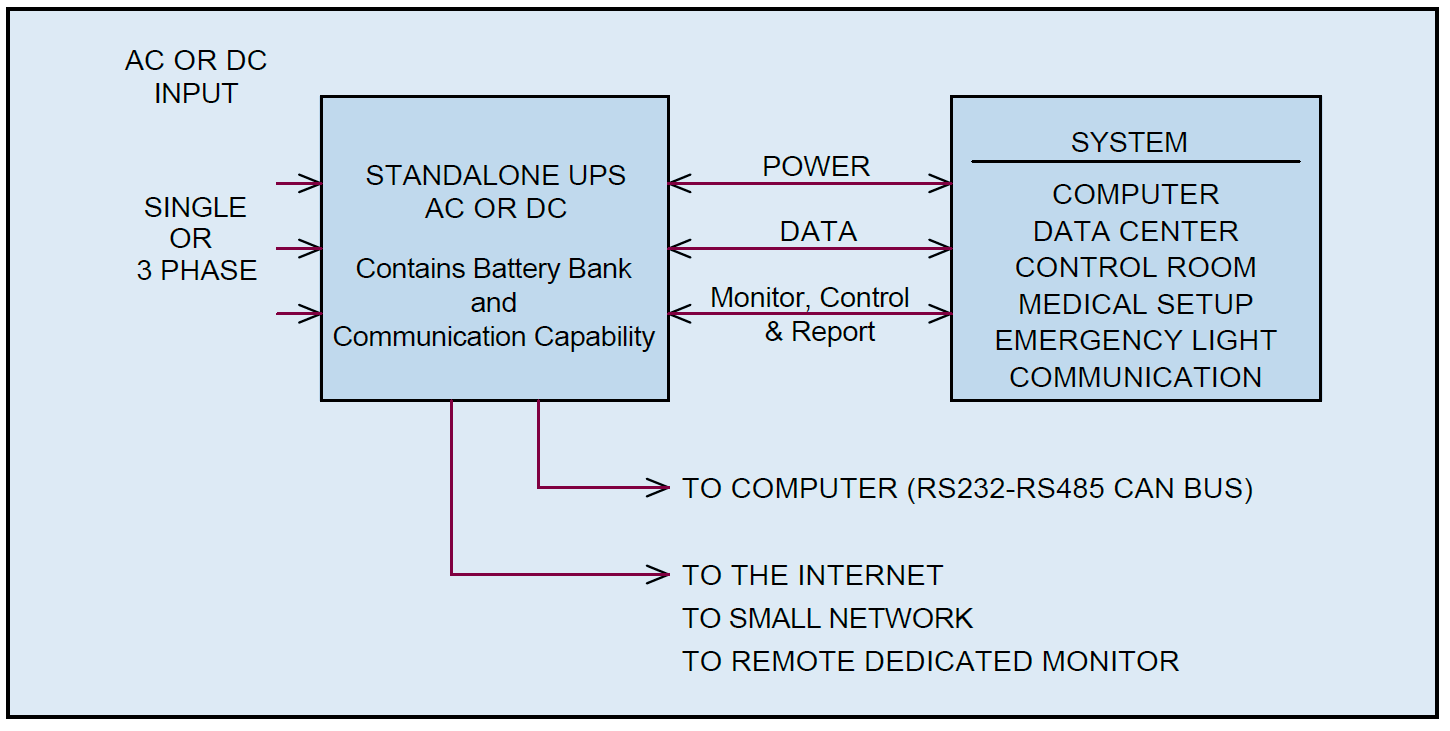 Standalone UPS inserted between the utility and the system.

The main advantage of such a UPS is that it is a stand-alone unit which can be added at any time between the utility and the system. As such it can be an optional add-on to an existing system. The system manufacturer may leave the decision to the end user if to back up the system at their expense. When a UPS is used, if the type known as ON-LINE UPS (as opposed to “standby” UPS) is chosen, the transfer from utility to internal battery is instant and seamless. Often the system is actually running from processed and conditioned power and not directly on the utility. This produces the added advantage of stable, clean stabilized and transient free input delivered by the UPS to the system. This enhances the system performance and protects it from the fluctuations of the utility.

Types of UPS – A system which can tolerate one cycle drop of the utility fails can use a “Standby UPS” which is smaller and cheaper. With such an UPS type the system is actually running on utility while utility exists, and is transferred to backup mode only when utility fails. When utility exists, the UPS is 100% efficient. The transfer needs to be accomplished usually by a relay in one cycle i.e. 16mS for 60 Hz system or 20mS for 50 Hz system. Standby UPSs are inexpensive and small in size. They are commonly used by consumers to back up their personal computer. Having said this, some standby UPS contain conditional circuitry, transient protection and EMI filters. Most if not all can deliver to the user useful information on the condition of the battery. All standby UPS provide audible alarm that utility failed and the load is on battery. 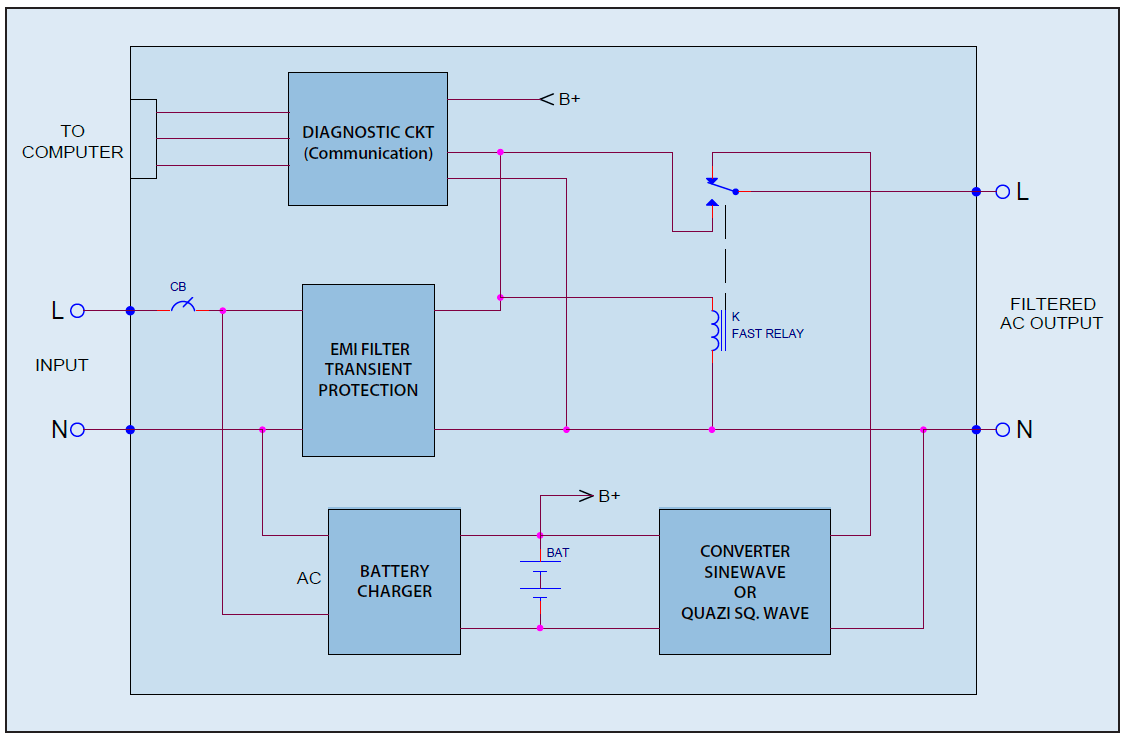 AC Standby UPS. This is the most common low power UPS used by consumers to back-up personal computers.

ON-LINE UPS – This is the common type used for critical application since the transfer offered by this type is seamless and it feeds conditioned power to the system at all time. In an on-line UPS the utility voltage is converted to DC first and then synthesized back to sine-wave. The battery in such UPS should be adequate for full load backup for desired backup time from a few seconds to a few hours. The conditioning of the utility power, inclusion of EMI filter and seamless transfer, make the ON-LINE UPS the choice for high-grade, critical mission and military systems. ON-LINE UPS can range in power from 500 W for a small system to over Megawatts for a data center plant. Fig. (2) shows the building blocks of typical UPS. 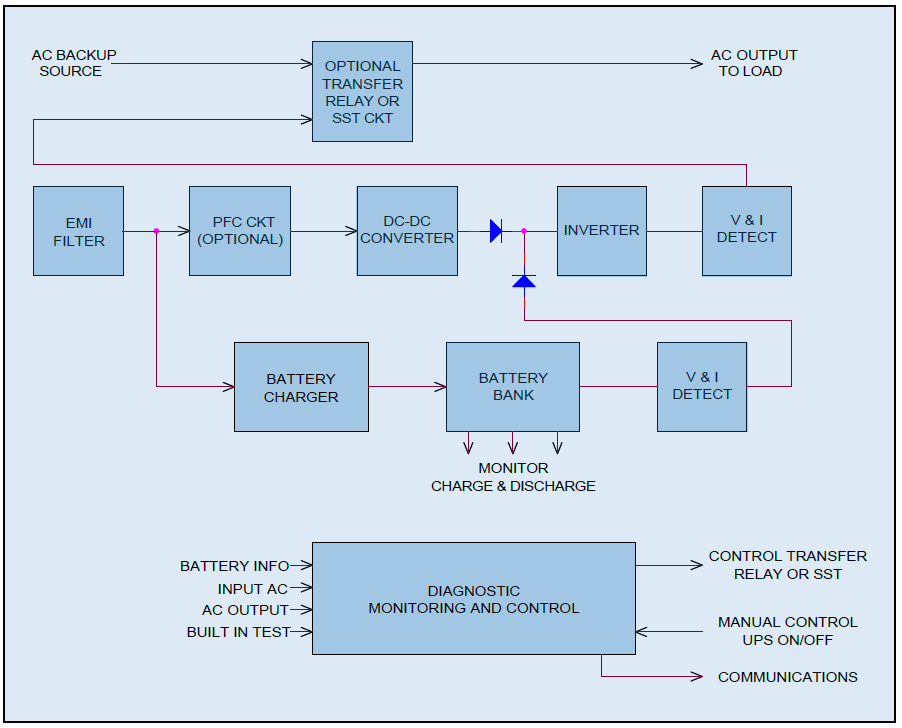 One AC UPS with back-up feed which takes over in case of failure. 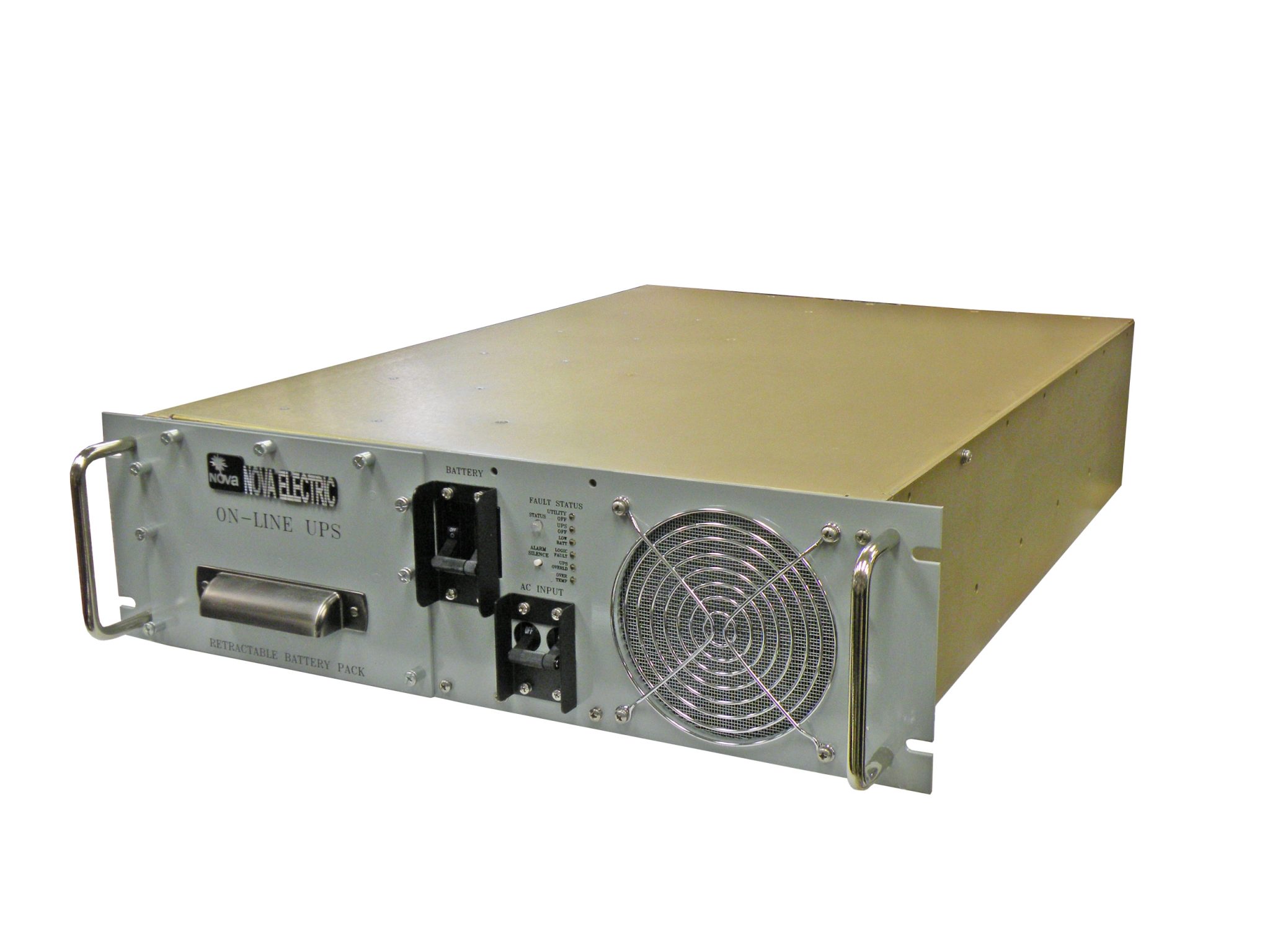 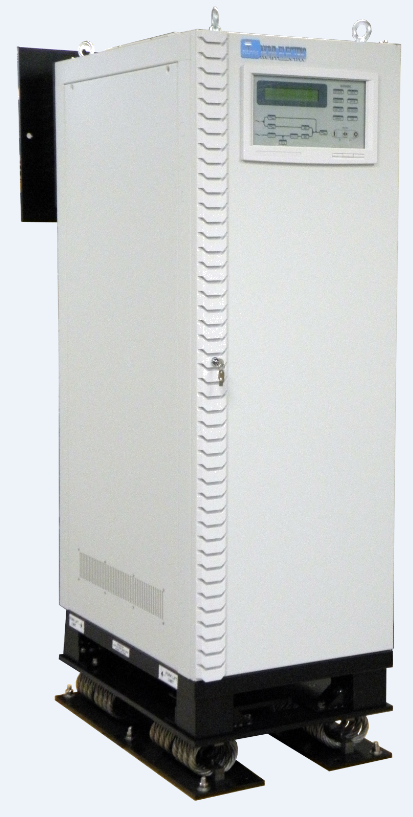 UPS 10KW to 450KW with bypass source and SST

Things to remember – It is essential to keep in mind the following while considering the use of a UPS to back up the system against loss of utility.

In conclusion, the stand alone UPS (AC or DC) offers limited time replacement to the utility when utility power fails or drops to below brownout level. Successful use of a UPS depends on considering the static and dynamic profiles of the load. Non-linear characteristics of the load, high inrush current at turn-on and motor or compressor loads require much higher power rating for the UPS. Failure to understand these load related factors will result in a deployment of a UPS which is unsuited to work with the given system.

A DC UPS like its AC counterpart keeps the input voltage to the system intact when the input source fails. The backup is temporary and it depends on the internal or external battery used as alternative energy source. Backup time of 5-15 minutes are common, but in case of electric utility control room or a nuclear reactor it can be 24 hours.

If a system is driven from 24 V (common to vehicular applications), 48 V (common to telecom systems), or 120 V (common to utility control room), a DC UPS containing internal or external (or both) batteries can provide the necessary backup in an efficient and much simpler circuit than an AC UPS.

Keep in mind however that DC UPS are meant to backup systems which run from DC input, and for the most part 12, 24, 48 or 120 VDC inputs. The vast majority of electronic system however accept AC, not DC input. 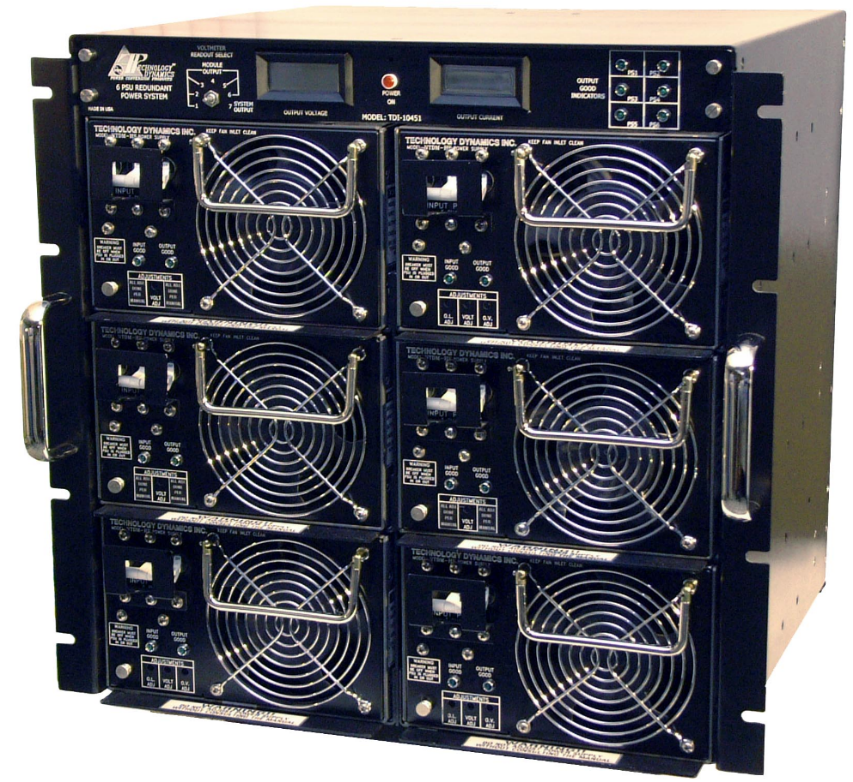 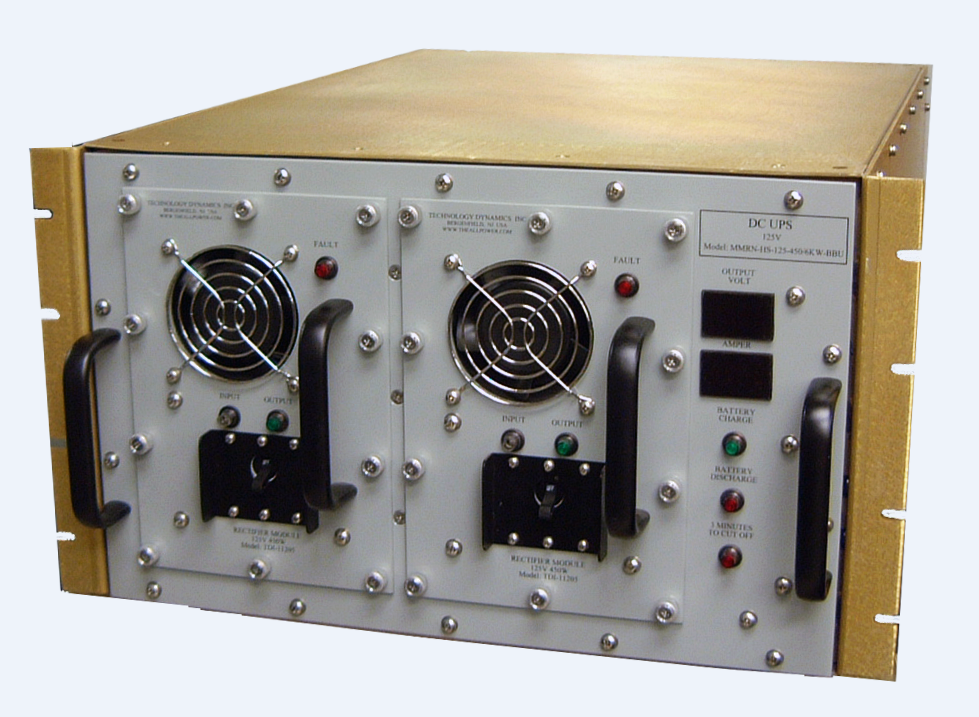 Redundancy of the Battery

An AC or DC UPS is used as we have seen to back-up the utility or the generator. But what happen if the UPS itself fails due to component or battery failure. Such a situation can happen and the most immediate solution will be to connect another UPS in redundancy. This will also require a transfer switch (solid state or electromechanical) to switch the load from the failed UPS to the one backing it up. The down side of this scheme is doubling the cost of the back-up system, but that may not matter if the cost of failure and therefore lack of backup is significantly higher. The upside however is that the second UPS can pick-up at the end of the battery capacity of the first one and hence double the backup time. 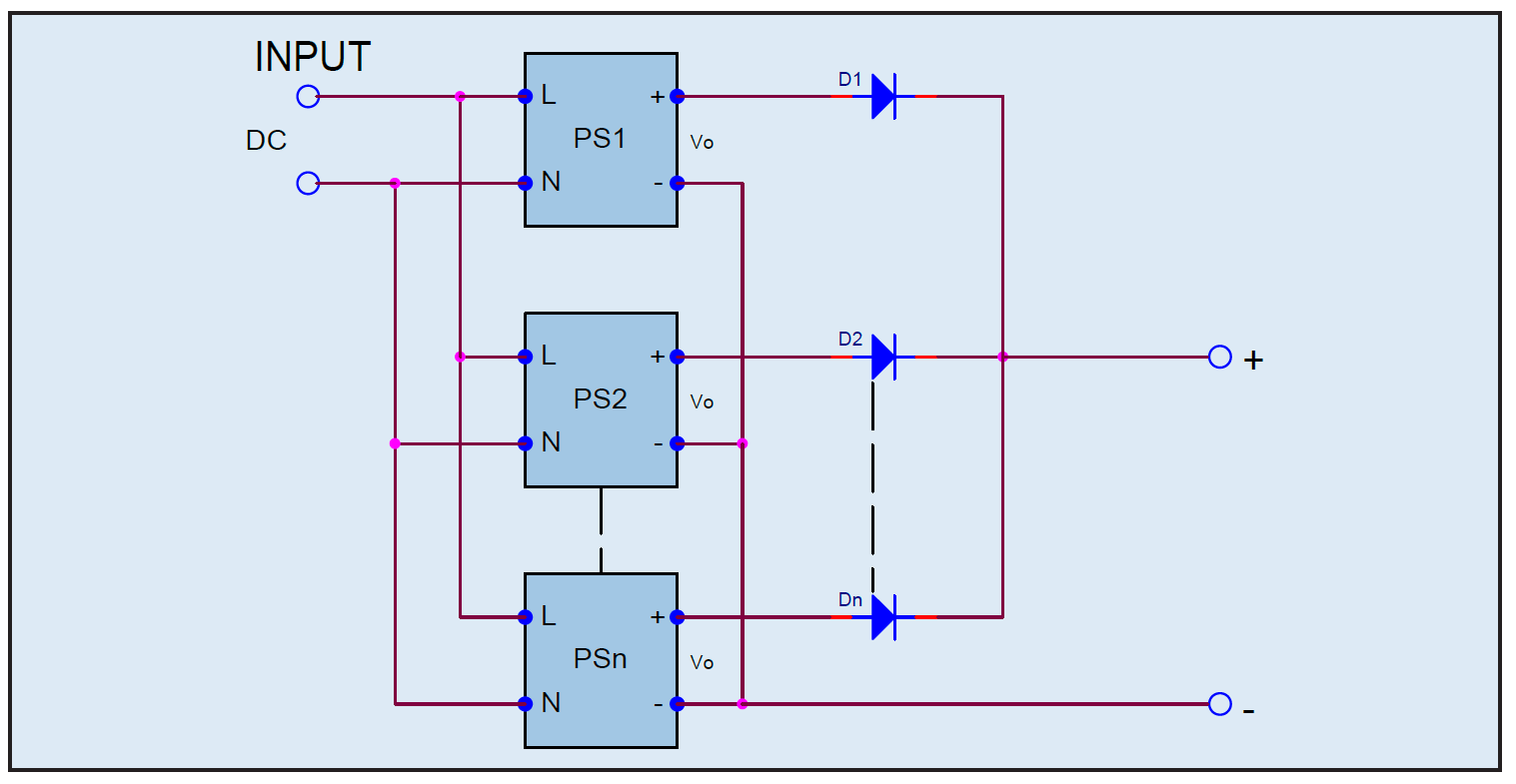 There are other concepts to consider:

Testing the battery general viability or specifically its state of charge (SOC) is required in such applications. Yet measurement of SOC of Lead Acid batteries is rather difficult, so most designers opt to measure the battery voltage under load as a way to determine if the battery is maintaining good capacity. Nova Electric has developed a circuit which load the battery for 100mS during which the battery voltage is measured and recorded.

The test is repeated at predetermined intervals ranging from once every 10 seconds to once per day or per week. The readings are then compared to a reference battery or to manufacturer criteria to determine if the battery should be replaced.

Critical applications such as military, medical, banks and laboratories, cannot tolerate interruption in functionality due to utility or power system failure. Therefore fault tolerant power systems are used. Such systems that bridge over utility failure are the AC or DC UPS which contain batteries as reserve energy source. To guarantee non-stop functionality despite power supply failure, redundant power systems connected in (n+1) configuration are used. Long term backup for utility failures deploy UPS and generator in a hybrid power system.